A California teenager was taken to the hospital Tuesday morning after a shark attacked her in shallow water at Kahana Beach on Maui.

The incident happened at around 9:45 a.m. at the beach fronting the Hololani Resort at 4401 Lower Honoapiilani Highway, a third of a mile north of the surf area known as "S-turns."

Fire crews arrived and found Sage St. Clair, 16, with a 4 to 5 inch gash to her left calf. Fire personnel provided medical treatment and dressed the wound. The family declined medical transport, electing to drive her to the hospital themselves.

St. Clair, who is from Livermore, California, told DLNR Division of Conservation and Resources Enforcement (DOCARE) that when she was bit she was sitting near the shore in waters that were only about 2 to 3 feet deep. She did not see anything in the water prior to the incident.

The girl's father was reportedly kneeling in the water next to her and felt something bump his lower back. Shortly thereafter, she said something had bit her. The injury appears to have been caused by a small reef shark, though the exact species is unknown. Officials say it was not a tiger shark.

DLNR and County officials planned on keeping Kahana Beach closed from "S-turns" (near Pohaku Park) to the Kahana Outrigger until sundown on Tuesday. County lifeguards are scheduled to assist with another assessment early Wednesday morning, though the DLNR says they expect the area to remain closed until noon tomorrow. 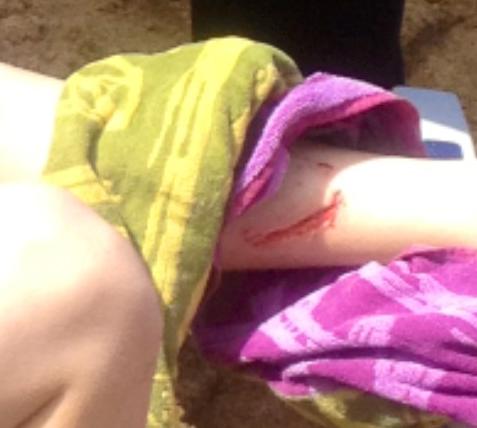