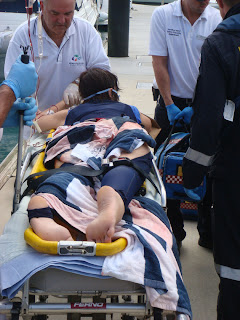 An Australian grandmother, Paddy Trumbull, has told how she fought off a shark that attacked her in tropical waters.

On holidays in Australia’s northern state of Queensland, Sydney resident Paddy Trumbull has described how she fought off the attacking shark by hitting the aggressive reef shark on the nose.

Swimming on the Great Barrier Reef in Australia’s tropic Whitsunday Islands, Paddy Trumbull was attacked and dragged under water by the shark that bit her on the legs and buttocks.

The brave 60 year old lost a significant amount of blood in the attack, yet was able to fend off the shark she described as either a Reef Shark or Bronze Whaler.

“I then thought, ‘this shark isn’t going to get the better of me’ and I began punching it on the nose,” Paddy Trumbull told Australia’s Seven Network.

The fighting grandmother said that thoughts of her family flashing before her during the death defying attack kept her alive.

“He was huge, he was at least two metres but his nose was so hard, I could see the teeth, glaring, but I’m not seriously panicking, all I’m thinking is of surviving,” a bed ridden Paddy Trumbull said.

Medial teams treating Paddy Trumbull said they are simply amazed she survived the horrific shark attack after losing so much blood and sustaining such serious bite wounds.

Doctors told a press conference that Paddy Trumbull had lost approximately 40 per cent of the blood in her body in the shark attack.

“She was very lucky, along the lines she’s had excellent care, I mean her pre-hospital care and her transfer here,” Paddy Trumbull’s treating surgeon said.

“We were staggered when we saw the size of the wound that she arrived here in such good condition.”

SYDNEY (AFP) – An Australian woman suffered massive blood loss and was airlifted to hospital Saturday after being savaged by a shark off an island on the Great Barrier Reef, officials said.

The 60-year-old was dragged under the water by the shark near Dent Island on the popular Whitsundays around lunchtime, losing several litres of blood from deep leg wounds, the Queensland helicopter rescue service said.

"She has severe lacerations to her buttocks," a Queensland government spokeswoman said, adding that the victim's condition was "serious".

The woman was taken by dive boat to nearby Hamilton Island for an emergency blood transfusion before being airlifted to the Australian mainland for treatment, the spokeswoman added.

It is the second shark attack in Australia in a week, after a man was bitten whilst surfing with his young son by a normally timid wobbegong, or carpet shark, on Thursday. He was left with a tooth fragment in a leg.

According to records, 194 people have been killed by sharks in Australia over the past two centuries, but researchers point out that more people die from bee stings and lightning strikes.