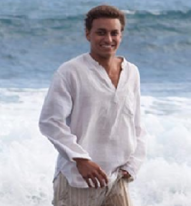 The following provides an update and more information on the previous article "Shark kills surfer off France’s Reunion island".

The information-site zinfos974 is reporting that the body of Alexander Rassiga ( 21 ) who succumbed to a fatal shark attack yesterday afternoon at Trois-Bassins located on the west coast of Reunion Island, will be laid out from 16:30 hrs today at a funeral in Saint-Pierre. Family and friends of the victim will gather to bid him farewell.

According to the same source, the autopsy showed that the first shark bite (below the knee) was not fatal, but a second bite severed an artery. Despite lengthy resuscitation attempts, the life of the young surfer could not be saved.

Immediately after the shark attack, Roland Ramakistin (the mayor of Trois-Bassins) has ordered a ban on swimming and water-sports all along the coast of his commune.

The ‘Minister for Overseas France’ Victorin Lurel has promised “ a plan to protect and support the commune “.

After a series of shark bite incidents (including two fatalities) in Reunion last year, the “Institute of Regional Development”( IRD ) was commissioned to conduct an extensive study to understand what caused the bite incidents. A total of 23 bull and tiger sharks have been tagged so far with acoustic tags to determine habitat use and their movement patterns. To learn more about this study, please see the related PDF-paper ‘Shark Risk Management in Reunion Island’ ( here ).

But some local surfers are demanding more drastic measures.
“We put murderers in jail, so let’s get rid of dangerous animals,”says Christophe Aubert, the brother of a surfer who was killed by a shark last year (see here) and a member of the local Association ‘Océan prévention Réunion (OPR)’.

Guy Gazzo, a diver and member of the Regional Fisheries Committee, shares this opinion. According to him, there is a “clear overpopulation of sharks” on the west coast. “With each dive, sharks are seen in groups of two or three,” says Mr. Gazzo, advocating the removal of the sharks.

(Reuters) – A shark mauled a surfer to death on Monday in an attack off the coast of France’s Indian Ocean island of Reunion, emergency services said.

The 21-year-old surfer, a resident of Reunion, died after the shark bit through his leg some 100 m (330 feet) from shore at one of the island’s most popular surfing spots.

Fellow surfers hauled the victim to the beach and emergency services unsuccessfully tried to revive him for more than hour, according to witnesses speaking on local radio station Freedom.

Two other fatal shark attacks off the island killed surfers in June and September of 2011, prompting local authorities to step up monitoring.

Monday’s attack occurred an hour after monitoring at the beach in question had ended, officials said.

Shark attacks have been on the rise in the Indian Ocean, especially in Australia. Surfers are frequently the victims.